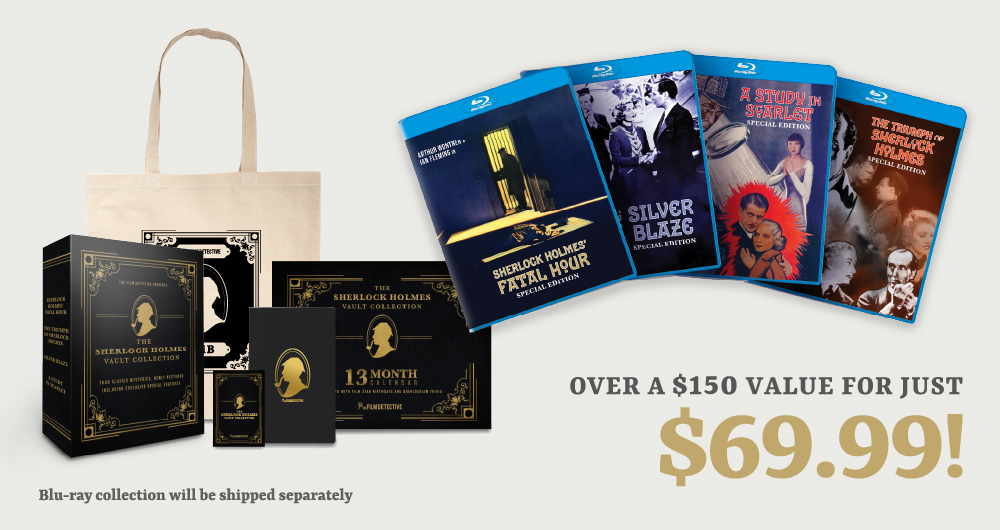 Break out your magnifying glasses, detectives! Three lucky box sets will include an exclusive, limited edition Sherlock Holmes custom pipe, courtesy of our friends at Peterson of Dublin.

It doesn’t take a detective to see this is the BIGGEST collection of bonus materials we’ve ever released on Blu-ray or DVD. Special features include a host of newly restored Sherlockian shorts; Elementary Cinema, an original documentary by Ballyhoo Motion Pictures; a Radio Recreation of Sherlock Holmes; and three exclusive featurettes with filmmaker and film history icon, Samuel M. Sherman. To top it off, each of the four discs includes its own audio commentary, original film posters replicated as postcards, and a booklet insert with an original essay!

All sales are final.  Due to the “produced to order” nature of the box set program we cannot accept returns or exchanges for these items.  We only accept returns for refund or exchange for manufacturing defects.

Orders can be shipped to the USA, Canada, and the UK.  For any questions regarding the possibility of shipping orders to other countries, please contact The Film Detective team.